You are here: Home / Sweden / Stockholm / 10 Reasons I Love Stockholm

I just got back from a few weeks in Stockholm, and while this opinion may be biased (since I grew up in Sweden and lived in Stockholm for several years), it really is one of the most fabulous cities in the world. It was my first trip home in 3 years, so I felt like I sort of saw it with “new-ish” eyes and it struck me again how much I love it. There are many more than 10 reasons it’s my favorite city, but these are my top 10:

Stockholm is quiet! The older I get, the more stressful I find the constant onslaught of noise that you can’t escape (at least not where I live) and the silence in Stockholm really hits you when you first arrive. There is almost a hushed feeling everywhere, sort of like after a big snowstorm, when the world is so serene and quiet. Even street musicians play at a tolerable level (and it’s usually good too). We were lucky enough to stay in a gorgeous apartment, lent to us by friends, right in the middle of the city, and it was so peaceful. We slept like babies (not the kind that wake up screaming in the middle of the night!) and both felt the stress melt away. Funnily, I was talking to a store clerk in an adorable shop in the new MOOD galleria who told me several of his friends had recently moved out of the city because they were so tired of the noise! 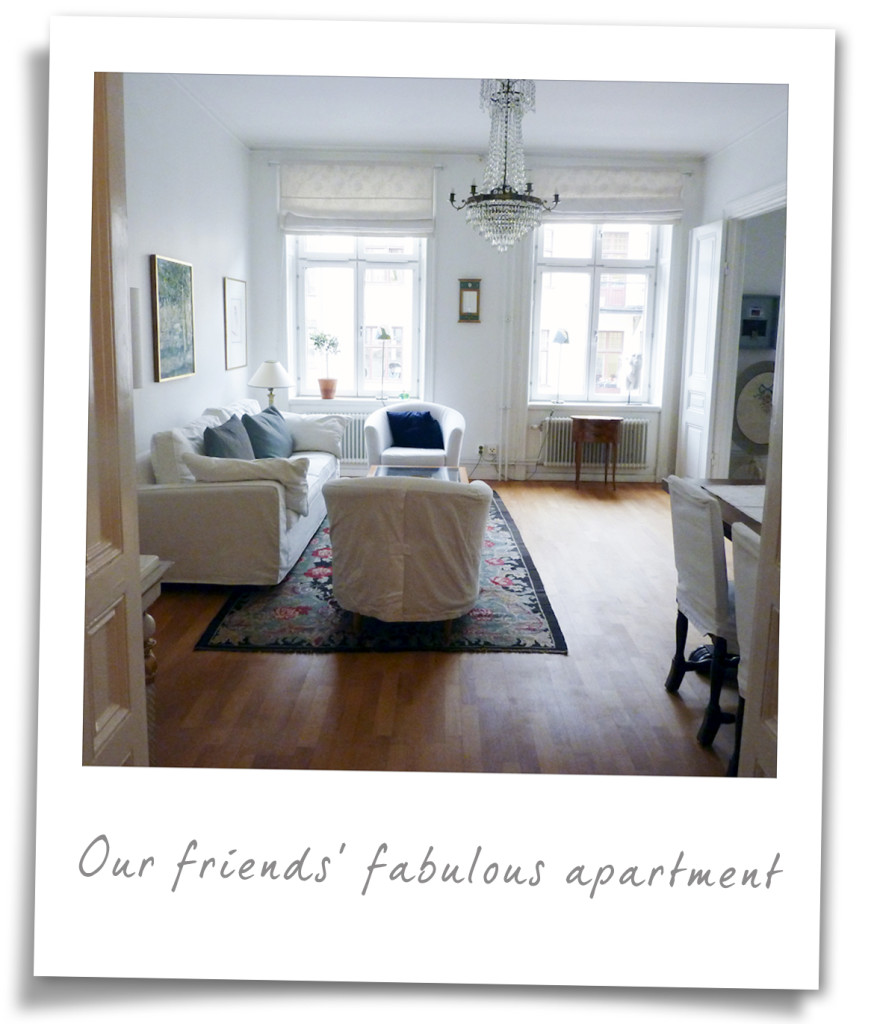 The city is built on islands, so there is water everywhere, which is not only gorgeous, it makes the air feel fresher and clearer, and it’s clean enough to fish and swim in, right in the city! Actually, everything is clean, and there is so much greenery everywhere. I took the picture below at Kastellholmen, which is a fabulous island lying between the Old Town and Djurgården, an easy walk across a bridge close to the Grand Hotel. And if you drive (or take the T) 10 minutes north, south or west of the city, you’re in the country, with farms and forests and beaches (not west). And the architecture is beautiful, the stone houses are colorful in a pretty, muted way, and there is lots of fancy stonework everywhere. 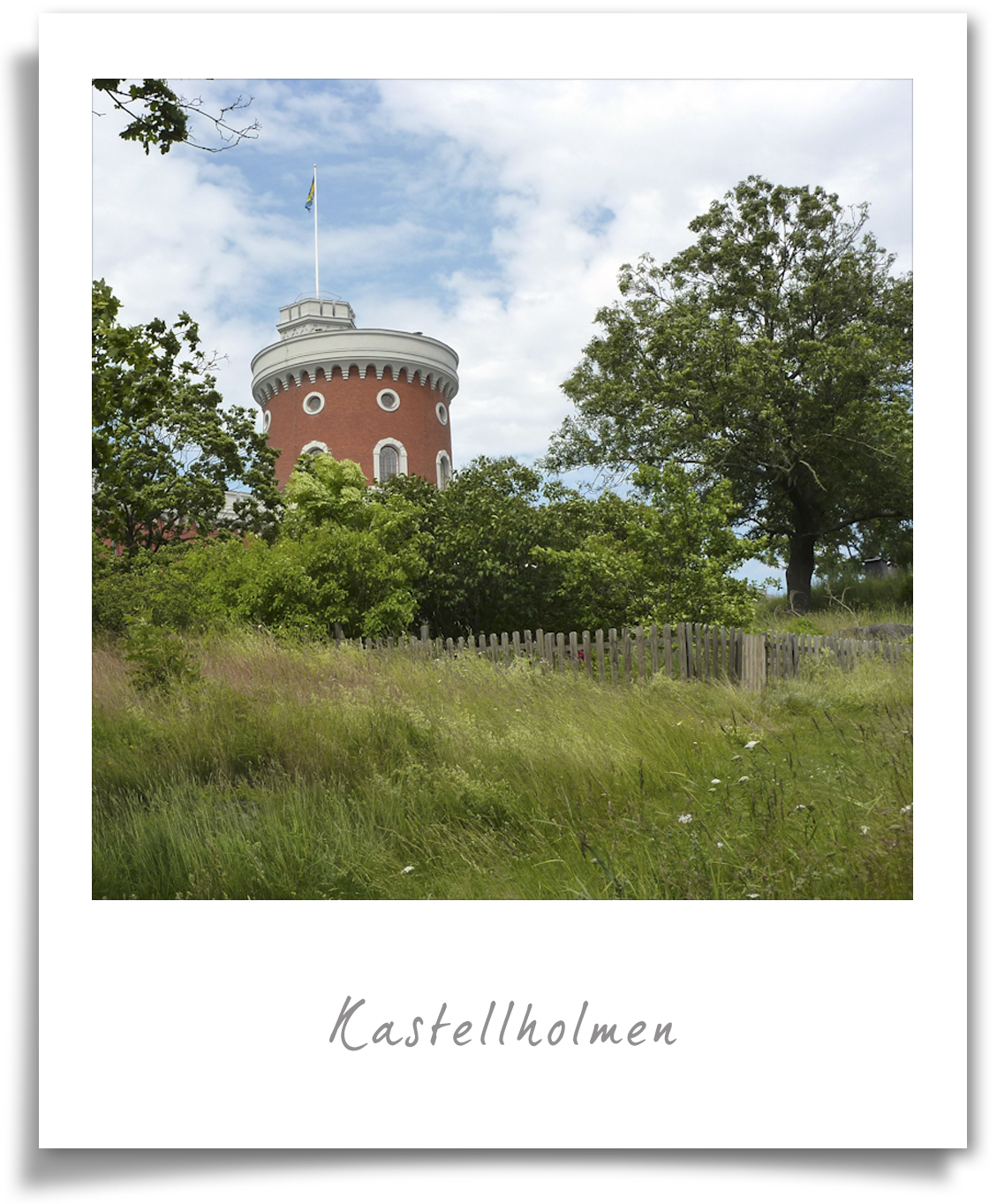 You Can Walk/Bike Everywhere

You can walk and ride your bike pretty much everywhere in Stockholm. We only took the T once in the 3 weeks we were there, and only because it was raining so hard. Other than that, we walked to and from shopping and dinners on the excellent walkways along the water. And for those who like to bike, definitely rent one if you visit. The bike lanes are fabulous, you are (for the most part) protected from both parked cars (where people can suddenly open a door and kill you) and traffic; there are public air pumps set up by the city here and there; and so many people ride their bikes that drivers are very used to it and very considerate (there are always exceptions of course). And there are bike lanes going out of the city too, you can easily bike (or walk, since the walkways are usually right alongside the bike lanes) from say Söder to Hagaparken. 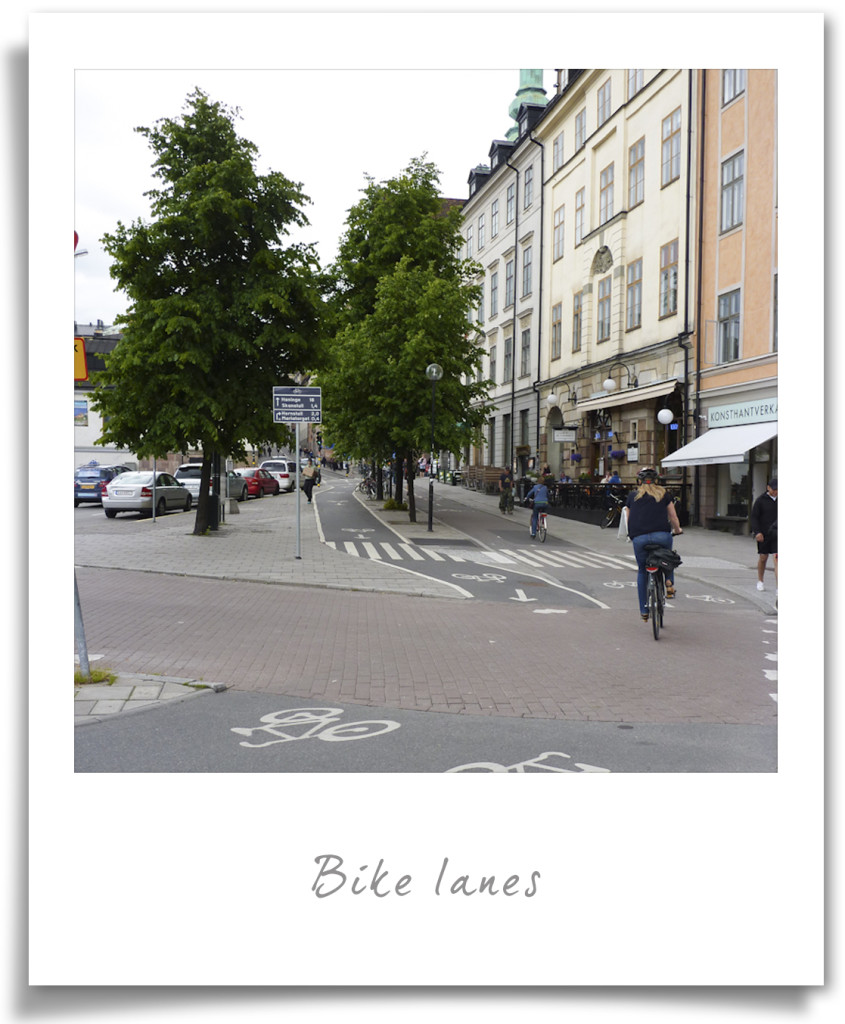 There are so many stores and shops, and I love how they often, Paris-style, focus on one thing only (although how they all survive is a mystery to me) – wood carvings, porcelain repair, lamps (there are so many lamp stores!), hats, tea, etc. And there are lots of adorable little (as well as great, large) decorating shops, many with that French Country, shabby chic look that continues to be so popular. With the dollar not doing so well, it is a bit pricey coming from the US, but there are lots of sales in the summer, so you can find good deals. 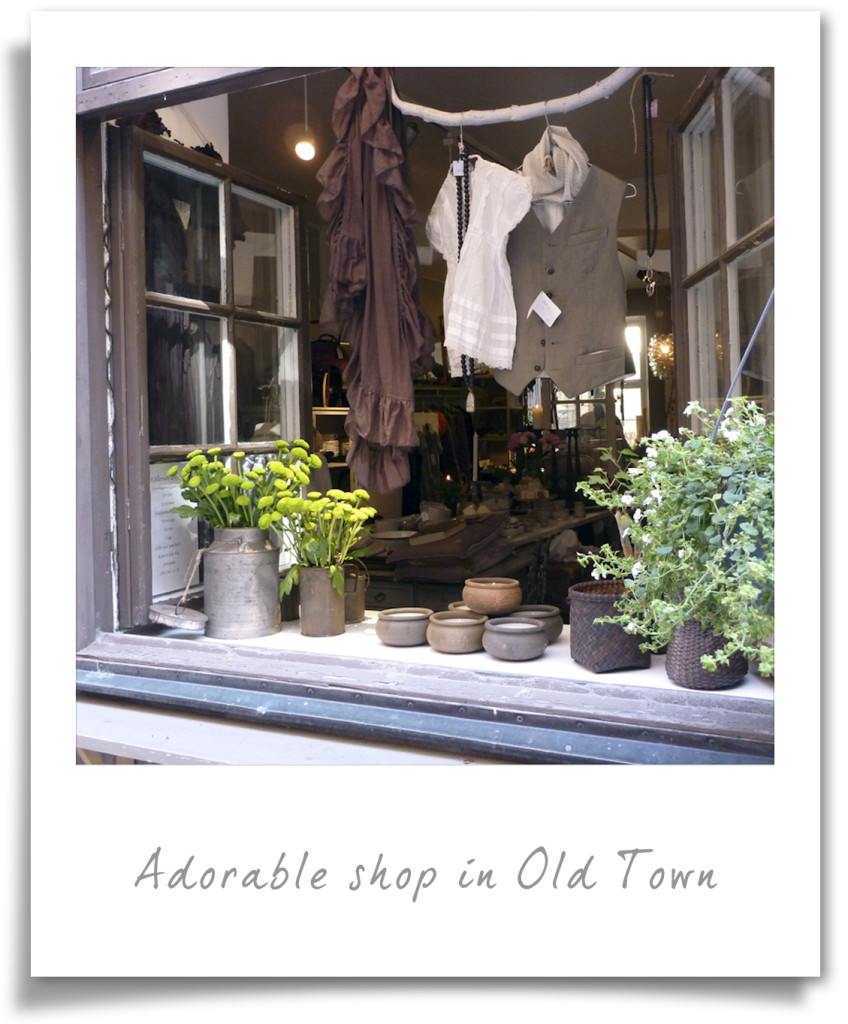 More specifically the outdoor spaces. Since summer is so short and we Swedes love warmth and sunshine, as soon as the weather starts heating up, outdoor eating areas pop up everywhere (the official allowed time frame for restaurants to add outdoor seating is April 1 – October 1). They’re cozy, festive, and there are always customers – breakfast, lunch and dinner. Places are open very late, people linger long into the night over wine and beer, and nobody rushes you. There is never the feeling they want the table for the next party, and you have to ask to get the bill. And, at most places, dogs are allowed in the outdoor seating areas. The food is another story. It’s all delicious, but I try my best to stick to a vegan diet, and there isn’t much on the menus you can eat as a vegan. And it is expensive, much more so than here in the US.

In Sweden, things work, and they work well. Everything feels so easy and seems to go so smoothly. Sitting on the (quiet, no music, hushed conversations) bus (which runs every 10 minutes) which clearly was outfitted with excellent shocks, going from Arlanda (the Stockholm airport) into the city on smooth, perfect roads, we both agreed that Somerville has a lot to learn. And Swedes know how to stand in line. Or rather take a number. Many stores have the “take a number” system, which works excellent. You go up to the machine, take your number and then wait, somewhere where you’re not in the way of others, for it to be called. Public bathrooms are very private (sturdy doors, no gaps above and below) and even though many are unisex, they are almost always very clean, and you usually find that people put the toilet lid down and turn the light off after themselves.

Since nobody stops to ask if you want help if you’re standing with a map on a street corner, you don’t tip (so service can be a bit on the less attentive side), and saying “excuse me” when you want to pass someone, say in a grocery aisle, is not the norm in Sweden, but staring at the person or shoving your way past them is, it’s easy to think that Swedes are rude, but they are not. It’s just the way things work there, and once you talk to people, you will find that they are easy going, super friendly and incredibly nice (there are always exceptions of course, but in general).

We got to Sweden the weekend before Midsummer, and I had not been home that early in the summer for probably 10 years, and had totally forgotten about the feel of that all night lightness. It never really gets dark for a few weeks around the end of June, the sky only turns a deep blue for a few hours around 1 – 3 am or so, and there is something truly magical about it (I get happy butterflies in my stomach just thinking about it). I took the photo below to the left around midnight, walking home from dinner with friends, and the photo to the right is looking out a window in “our” apartment around 4 am. 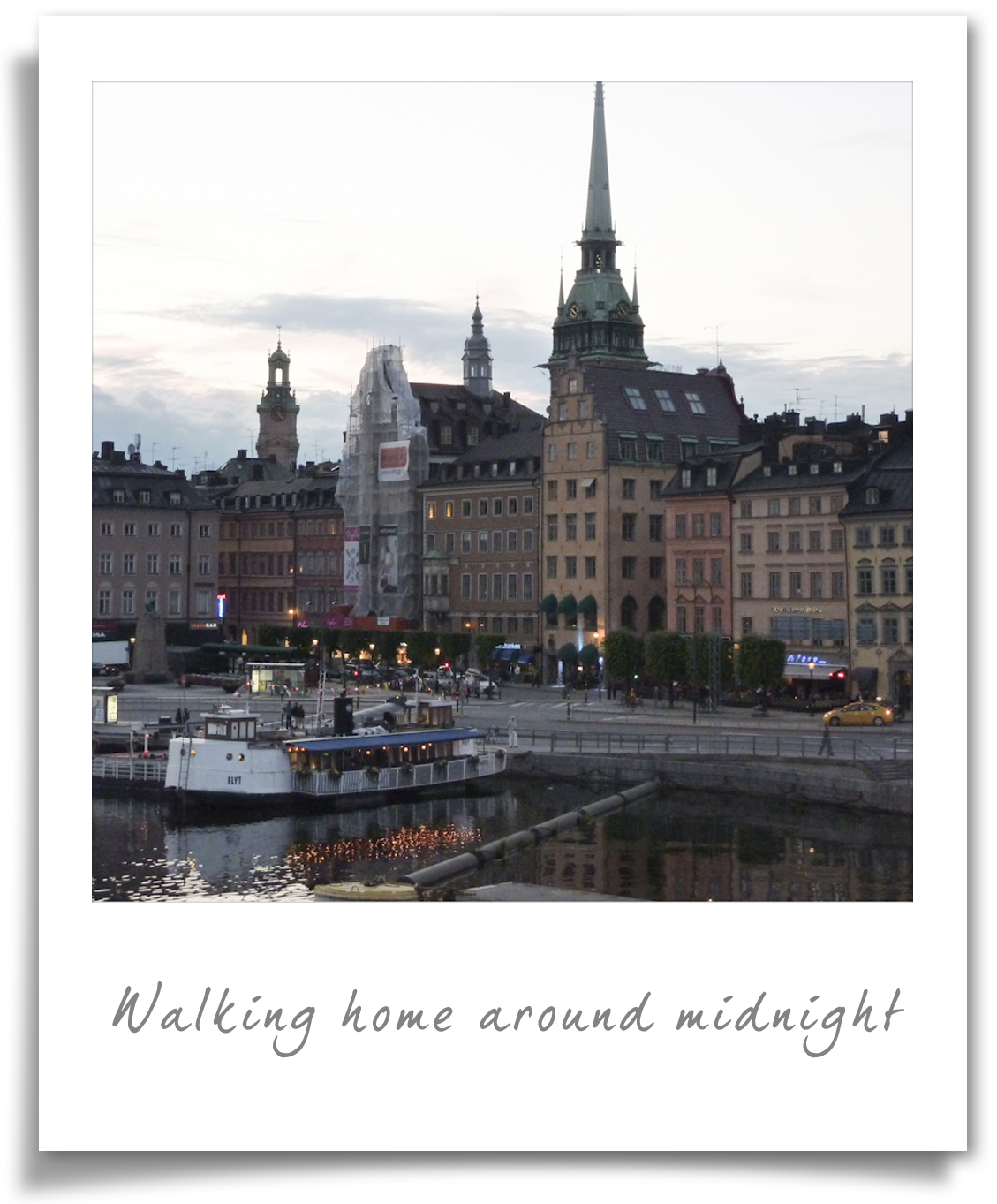 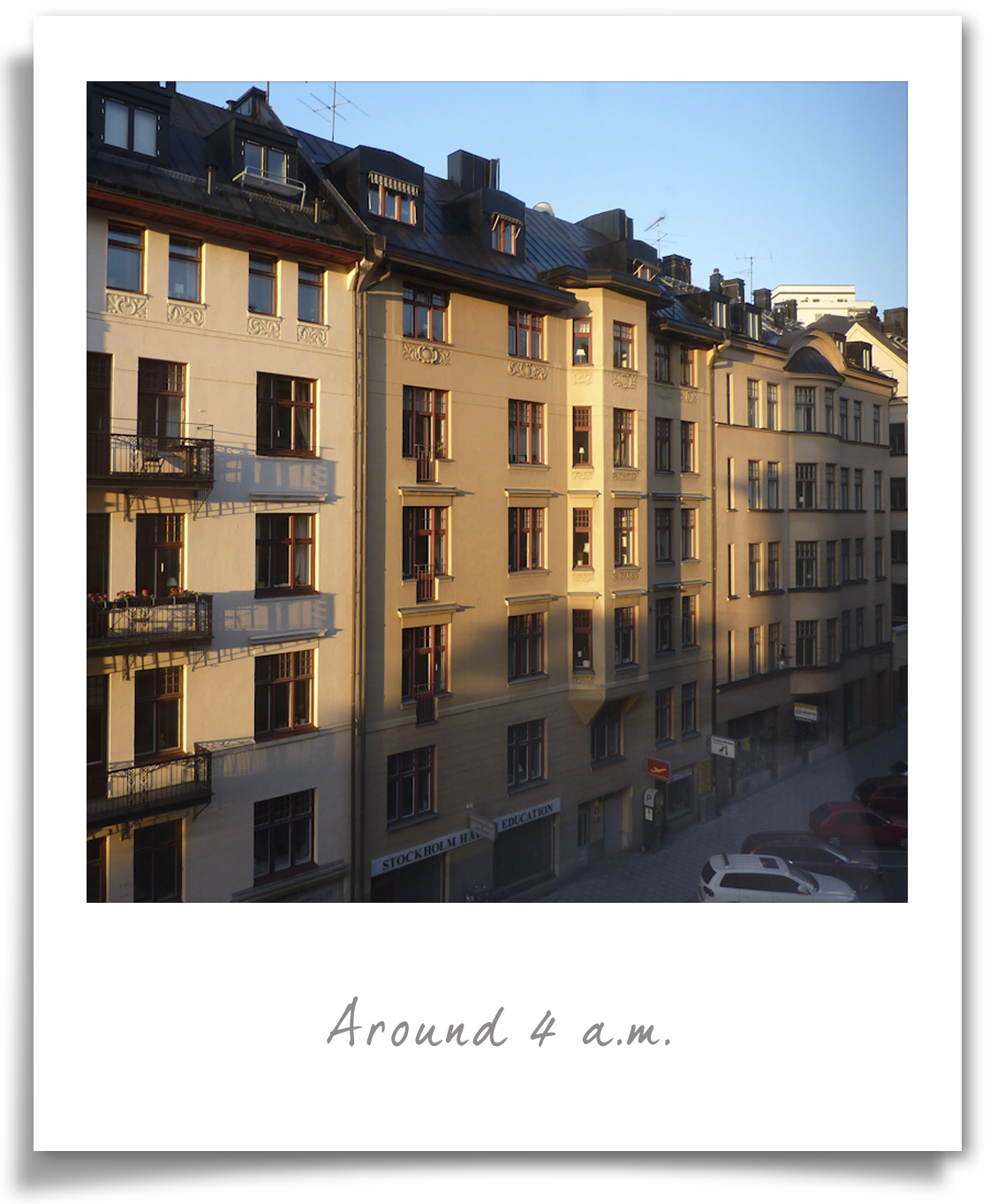 As noted above, Swedes are very easy going and pretty laid back, in a Scandinavian way. Laid back here does not mean not being on time, or not cleaning your house every week, or not ironing your clothes. But it’s all done in a nice, calm, and mellow way, no stress about it. And people take their time to enjoy life. Here, I feel that we are so pushed to work harder than humanly possible (and if you’re not prepared to do that, there is always someone else who is), and then somehow also find the time to work out every day, cook gourmet meals for 20 of our closest friends with vegetables harvested from our own sustainable urban garden, while keeping up with current affairs and volunteering with whatever it is we’re passionate about. It’s really an unrealistic approach to life, and in my opinion, unhealthy too.

In Sweden, people take their 5-week vacations and do nothing (well, relax and hang out, but you know what I mean). People work hard, but they also take coffee breaks, lunches away from their desk, chat with their co-workers and leave at 5. And linger over coffee or dinner. We were sort of wondering how people find the money to eat out all the time, and the time to sit for so long, but it is very contagious and so very relaxing! One day when we were out shopping, I just had to take a break and eat something and we went into a cafe we just happened to walk by. When we came in, there were a few others there: 2 women drinking coffee at one table, a group of 3 eating lunch at another, and a guy by the window reading the newspaper and drinking tea. We were there for probably an hour and a half, taking our time and reading the paper while eating, and when we left, all the people who had been there when we came in were still there! That is something I really miss here, people taking the time to just be.

I always feel like a slob when I get home [to Sweden], because here I dress in layers of fleece most of the time (since the weather is cold for the majority of the year, and when it’s not, there is that awful air conditioning everywhere). But in Sweden, there is no air conditioning and people LIKE warmth, so it’s easy to wear cute little dresses and sleeveless tops even at work or when shopping or going out to dinner. And people have a great relaxed, but chic style. This year, clogs with heels were everywhere (more in a separate post), as were lacy, romantic tops and tunics, layered with camisoles and slips. And another thing I really like is that people dress hip and chic no matter what their age is. I saw many women in their (I’m guessing) 60s who dressed as cool as a 25-year old would, without it looking strange and age-inappropriate. It just looked fabulous (wish I had taken a picture… oh well, next time).

I know some of this makes it sound like I hate the US and you’re probably wondering why I don’t just move back and stop complaining. Well, I don’t hate the US. I am a US citizen too, and I love the US as much as I love Sweden. I think it’s an amazing country and the people here are fantastic, so friendly, open and accepting, and much easier to get to know than Swedes. I’m not planning on moving back to Sweden any time soon (if ever), but it has long been my dream to be able to divide my year between the US and Sweden, and I’m constantly working on ways to do that. And that wish is a little more fueled now. To have the best of both worlds would be amazing.

For more on Stockholm, check out the posts from my latest  visit: