I actually became aware of biodynamic farming thanks to my husband. He is very interested in anthroposophy 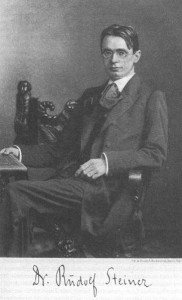 and was reading lots of books about and by Rudolf Steiner, the founder of both anthroposophy and biodynamic farming (and Waldorf education).

Once I started researching it a bit, I was amazed that I had not heard about it earlier, and that it is not more popular, especially since we are all becoming increasingly aware of the dangers of pesticides and other chemicals used in agriculture. I have often asked vendors at my local farmers markets if their produce is biodynamically grown, only to be met with a puzzled look.

Biodynamic farming is catching on here in the US, but it’s still much easier to find biodynamically grown products in Europe (you’ll know that something is certified biodynamic if it has a “Demeter” label). Some claim that people who are normally allergic to fruits and vegetables can eat them when they have been biodynamically grown.

I have yet to put that to the test though – I have not been able to find biodynamically grown vegetables anywhere where I live, but biodynamic wines have started to show up on the shelves on my local wine shop, and I’ve tried a few. None was mindblowingly good, and if we were allowed to order wine online in Massachusetts, I would do more extensive research on this. 🙂 Hopefully that law will change soon. And voila! It did!

How does it work?

In biodynamic farming, you do not use any synthetic fertilizers or pesticides whatsoever, only your own household/farm compost and other preparations. The farm is considered a self-contained entity and should be able to support itself. It’s all about the perfect balance – you need the right amount of livestock to produce enough manure for your crops and the right amount of crops to feed the animals, etc. The soil is of great importance; it’s a living organism and needs to be nurtured as one. Crop rotation and companion planting is also important in biodynamic growing.

There are certain natural preparations used to fertilize and combat pests, and even though the methods sound a bit gross (for example, yarrow blossoms are stuffed into urinary bladders from red deer, placed in the sun during summer, buried in earth during winter and retrieved in the spring), it works, and it won’t poison your food.

The solar and lunar rhythms are also important, which sounds a bit out there, but makes sense. (Think about tides, the moon certainly has an influence on the earth.) As an example, in biodynamic growing, it is advised to plant seeds 48 hours before a full moon, but avoid planting seeds during the new moon. There are many activities you can do during the full moon but very few during the new moon (you may fell timber though). Traditional Indian farmers considered the day before a new moon “No Moon day”, and no agricultural work was done that day.

As you can see, there is a lot to growing biodynamically, and one can understand why few attempt it, although when you consider the benefits to us and the entire earth, I certainly wish more people would.